CrossFIt has been a part of my life for almost three years and I am still drinking the Kool-Aid full blast.  Lately I have been in a funk and have not been going to many classes, and not going all out when I did attend class, so it was definitely time for a jump-start. I decided it was time to obtain the $1,000 T-shirt! Level One Trainer Certification. Luckily CrossFit Federal Hill was hosting a seminar so I didn’t have to travel far. Surprisingly it took a few weeks to sell out, which I thought was odd, considering it was the first one in this area. I signed up early and got in the proper mode for studying! Procrastination.

Shortly after I paid the fee I received the Level One training guide. I read through it twice before the class. It is pretty basic and a lot of it is pictures which always helps the reading go faster. I saved it to ibooks which made it easier to read. A lot of the things I already knew, maybe I just didn’t practice. Some of us squat below parallel and some of us don’t. I definitely suggest you read through the guide a few times.

I got there early Saturday morning and there were already several people there ahead of me. Everyone was still in their car in the parking lot, reading the training guide or just waiting. Anticipation was in the air, as was caffeine, beards, and black sports cars.  The trainers arrived in a minivan and all piled out…and it was game on.

The class was definitely organized. Everyone lined up, and filtered through the sign in table. Within twenty to thirty minutes, everyone was signed in and was seated and ready for class to begin. The trainers were very engaging, from the beginning they were quick to introduce themselves and let everyone know what would happen next. I would encourage any corporate trainers or event organizers to attend a Level One Cert. They trainers made sure to talk to people who were seated on the outside and it was clear it was to keep people seated, and keep anyone from wandering off. Really well done.

The first day was a mix of one hour lectures and then small group work. Ten people to a trainer. The heaviest thing we lifted was a PVC pipe, however I was wiped out and sore as hell the next day. The trainers were all very passionate about correct form and made sure everyone got some one on one time, pointing out opportunities and ways to get better form and maximize efficiency. The lectures were all very informative and the format followed the training guide. My suggestion is to take notes on what the trainers write on the whiteboard, and what they repeat. If they say it twice, it will be on the test.

The WOD the first day was pretty tough. Thrusters and Burpees, nobody likes either of them, except sick people, and together they are even worse. But hey, we don’t pay the dues to lay up. I went in the third heat which was a mistake. Should have gotten it out of the way. I think was the last to finish, which was totally not what I wanted, but it happens. Definitely a lot of people cheering, which is nice. it is what it is. Move on. Everybody stuck around for a few beers afterwards. I have yet to attend a dry CrossFit event! 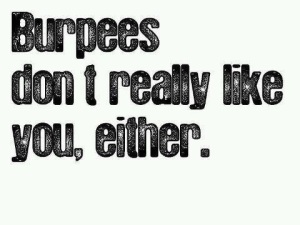 The second day was similar to the first. Lecture, group work, lecture…etc. The format followed the training guide. Sunday’s WOD was a little better. Med ball cleans, push ups, and sit ups. We covered nutrition and programming in the afternoon. I would have liked more time on the programming aspect of CrossFit. I’ll have to check and see if there is another seminar on that topic.

The test was challenging. Read your notes and read the manual. I would also suggest doing a quick Google search on CrossFit Level One Cert flash cards. There are several sites that offer flash cards. It would have been nice to have thirty minutes before the test to read through everything.

I would definitely suggest the course to anyone who needs a jump-start or is looking to expand their CrossFit knowledge and understanding. I don’t think you will find a better group of trainers. James, Joey, EC, Cameron, Dave, Melody, and Sarah were all very knowledgable, motivated, and engaging. Definitely looking forward to staying in touch with all of them.

* Read all of your notes Sunday morning and Sunday during the lunch break!

Trying and finishing last beats not trying every time!

8 thoughts on “Level One Certification Weekend”